Housing Insecurity in the Time of COVID-19: Evidence from Two Surveys

Adequate housing availability was a major concern nationally and in the Atlanta region well before the onset of the current pandemic. Atlanta, as most places in the nation, had mounting home prices that incentivized building for higher-income buyers. This constrained supply helped shut out potential middle-income homeowners, pushing those potential homeowners down into the rental sector to drive up rents out of the reach for those of lower-income. The real fly in the ointment? As with so  many things, the pandemic has made the problem worse, with factors like limited construction, increased demand for single-family housing, and cratering incomes via job loss all combining to exacerbate inequity and unaffordability.

We asked a question in the 7th edition of our Metro Atlanta Speaks (MAS) survey last summer (August 2020) about 10-county resident confidence in making housing payments for the next month.  The first chart below, drawn from a really useful MAS dashboard tool, takes a look at the findings by county. Regionally, just over three in ten residents were less than very confident about making their payment the next month, with this varying a good amount by jurisdiction. For example, in both Clayton County and the City of Atlanta, over four in ten weren’t very confident about making the payment, while in Cobb, Cherokee, and Fayette over three in four were very confident.

Chart 1: MAS 2020 –Confidence in Ability to Pay Next Month’s Mortgage or Rent, by County (and Region) 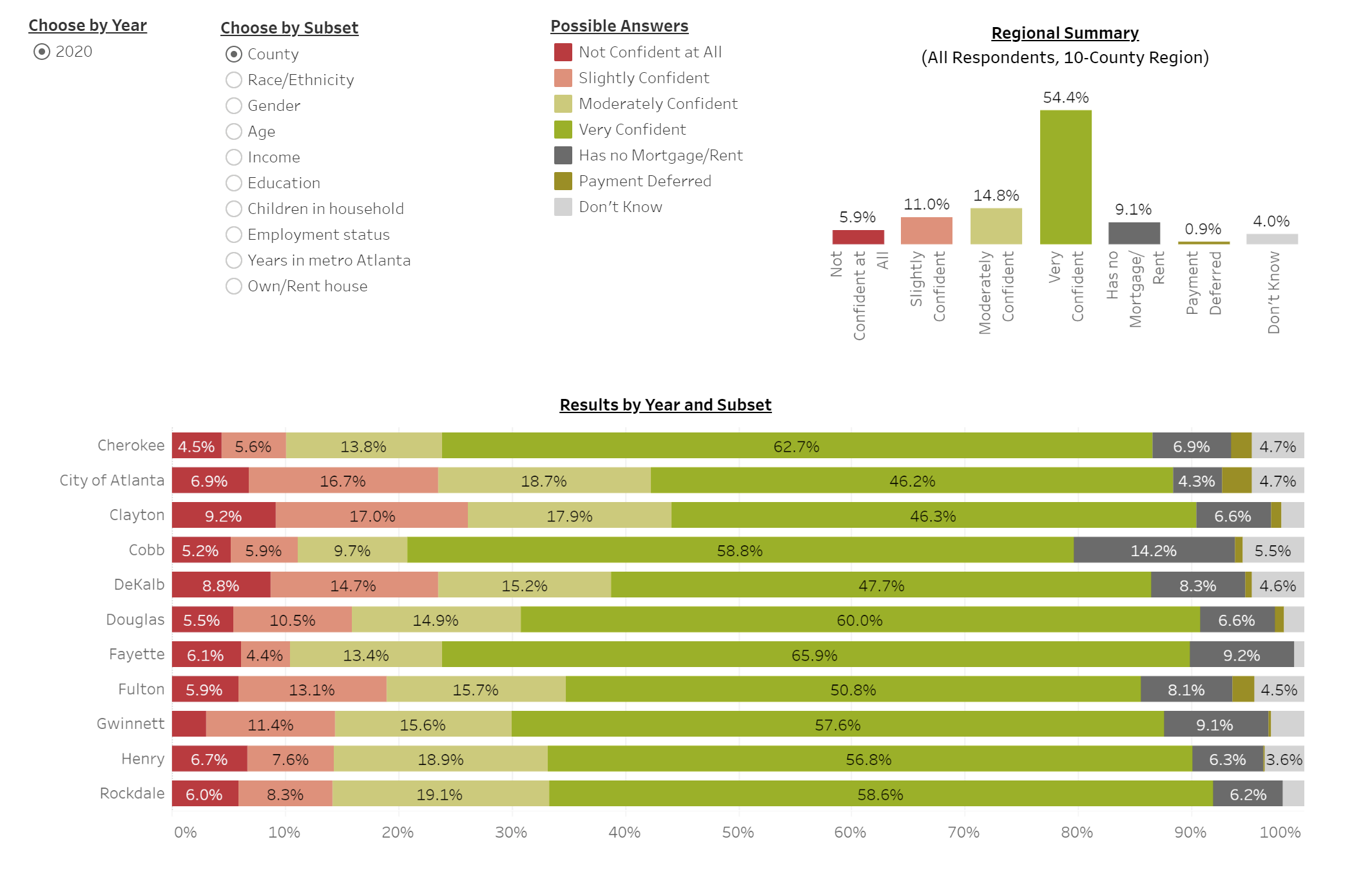 And MAS goes deeper than the county-level, as it presents results by demographic crosstabs. As the pandemic has clearly impacted races differently in terms of public health indicators, e.g. case incidence, hospitalizations, and now vaccinations, it is little surprise that housing burdens differ greatly, as well. Chart 2 shows that more than 4 in 10 Blacks surveyed were less than very confident of making next month’s payment, versus only 2 in 10 White respondents. If that discrepancy is not concerning enough, Chart 3 presents the results both by tenure and by presence (or not) of children. Confidence in making payments is far lower if you are a renter (47% less than ‘very confident’ ) than if you own (only 23% less than very confident. If you have children, you are more likely (40% less than confident) to feel very confident about your next payment than if you do not have kids (27% less than very confident).

Chart 2: MAS 2020 –Confidence in Ability to Pay Next Month’s Mortgage or Rent, by Race/ Ethnicity

Chart 3: MAS 2020 –Confidence in Ability to Pay Next Month’s Mortgage or Rent, by Tenure; Presence of Children

As we noted before, the MAS poll took place in August 2020. The summer surge was ebbing. The pace of the pandemic in the Fall, as we all know, continued to slow–but then thing got worse with the winter weather and holiday gathering surges. Did the changing public health trends translate into different levels of affordability concerns? The Census Bureau’s Household Pulse Survey Phases II and III lets us take a look at this. The image in the first screen capture below shows that, as of the January 20-February 1, 2021 period, over 11 percent of Atlantans had slight or no confidence that they could make their next housing payment, up from 5% in August of 2020. A comparative look at the USA as a whole reveals that Atlanta payment confidence was below national trend levels in three-fourths of the survey periods from Aug. 2020 to Feb. 2021. Considering a few peer metros, payment confidence was lower in Atlanta than in Washington, DC or Dallas, but inhabitants of Miami and Houston were even more worried about payments than were Atlanta residents.

The second image below presents another area that the HPS delves into: perceived likelihood of foreclosure or eviction in the next two months. Initial analysis of historical data shows that, from mid-August to the last survey period, the share of Atlantans fearing housing displacement has increased. For more on evictions, check out the  Metro Atlanta Evictions Tracker. recent Evictions blog, and the SOARR initiative.